Here we'll discuss an additional and significant reason why the Magic Plus-Minus buttons utilized in Folkstyle Wrestling on Trackwrestling's Live Entry Dashboard should be eliminated. We'll do this by looking at the quarterfinal match between Ian Miller vs Brian Realbuto at the 2015 NCAAs.

The day started out innocent enough. A simple tweet about how to improve box scores in Folkstyle Wrestling. This should be harmless, this should be fine. No innocent wrestling stats geeks will be harmed during the making of the tweet. Then Jason Bryant, with his extensive background in and inclusive approach to engaging with the wrestling world, chimed in about Ian Miller and a rogue +1 thing --- and all HELL broke loose - at least in my world. 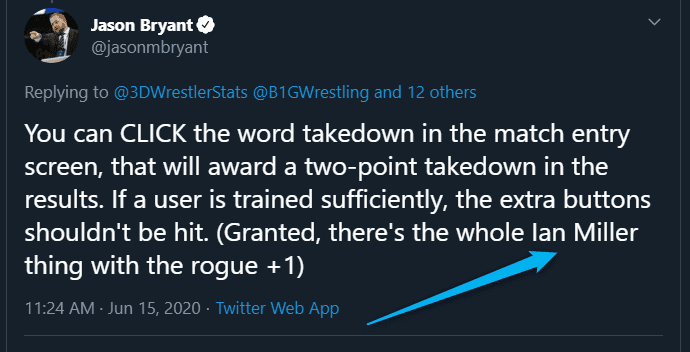 At first I had to admit that I didn't remember the details of the "Ian Miller +1" thing. Tipped off by another great mind in wrestling Britt Malinsky, the CFO, CEO, and probably a few other things at Wrestling by Pir8, I started researching.

My first thought was, I'll research that one and reply that I did some homework and then move on to reviewing the other 27 items JB mentioned in his tweets about box scores. Note: I love a challenge, so I welcome the notes from JB. First because he took the time to consider my suggestion and second because he breaks down problems to their essence and forces you to do the same for any claims you might be making or defending. So, I love the 27 other things. Also NOTE: it wasn't exactly 27, but I really like that number, and it was definitely enough to think about for a couple of days.

But then I finished watching the match ... and I was irate. Here's what happened.

Here are some details about their performance by Tournament year. Both wrestlers put together a nice NCAA Tournament resume to say the least:

*Includes MP from matches ending in a fall or injury

At first it looked innocent enough. I thought Britt had mentioned nearfall, so the +2 at the end of regulation just needed to be re-coded from +2 to N2, right? This is a huge pain in and of itself, especially if you want to move stats forward in a meaningful way, but not harmful to the outcome of the match ... or so I thought.

The +2 entry error occurred at the end of regulation forcing the match to go to overtime. So, I thought maybe the tide had turned and Miller faded at the end of the match. They just pushed the wrong button. Well, they did much more than that as you'll see below.

Then I moved to the video Britt had shared so that I could confirm the scorecard. When I compare video to scorecards, and I do this quite frequently, I start at the beginning. I start at the beginning not just because I don't trust the process, which I don't, but also because it's fun to the review the full match, its action and to confirm the flow of the scoring step-by-step. I skip forward for longer sequences without a scoring change, but I follow the entire match.

And, every thing is fine through the first 2 3/4 periods. Then we get to the final 30 seconds and the Missing E1, which changed the score significantly in regulation. 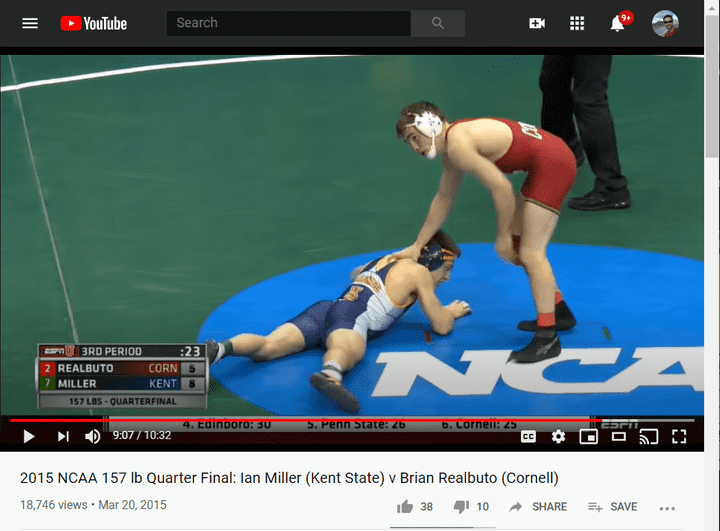 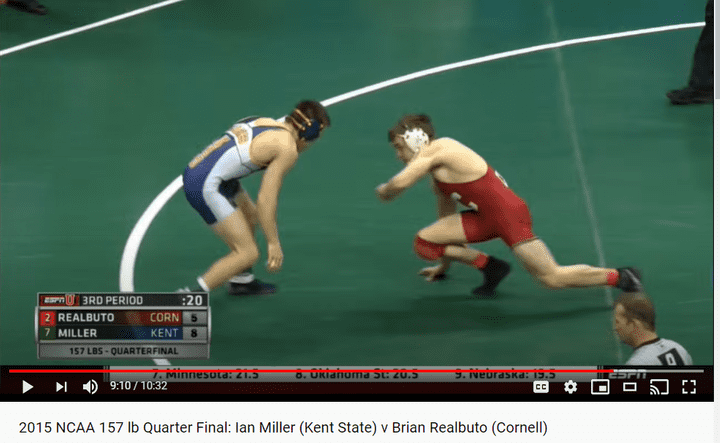 Towards the end of the 3rd period I watched and re-watched the flow of action. Realbuto truly does come on strong at the end and starts to turn the tide. He gets a late escape, followed by a quick takedown. This in and of itself is a significant development in the match because Miller had scored three takedowns to Realbuto's none up to that point. So, we're sitting at 8-7 in favor of Miller and Miller has locked up Riding Time, so it's essentially 9-7 at this point.

With about 25 seconds to go, Realbuto has to turn Miller for 2pt nearfall to tie or score a 3pt nearfall to win. If, he cuts him, that would move the score to 10-7 and Realbuto would have to take Miller down directly to his back and score nearfall to win, or force a stall call against Miller and score a takedown to tie.

No problem says Realbuto & he opts for the 2nd choice, trying to take down Miller to his back or getting a stall call then the takedown.

The Sting - And This Truly Hurts

SHOULD BE: changed to 9-7 for Miller b/c of the missing E1 (remember that Miller also has Riding Time)

SCORE: 9-9, because RT added for Miller & +2 added for Realbuto, the missing E1 was not noticed by refs or scorers table

SCORE SHOULD BE: 10-9 for Miller because of the missing E1 and the RT and the T2 for Realbuto. A much closer match than Miller should have had as he did fade a bit at the end, but he pulled it off.

Here you see both wrestlers staring at the clock right before Realbuto's turk. They looked at it for about 5 seconds. If the score had been 9-9, Realbuto probably would have pushed for the Nearfall points he needed to win the match. In his Finals interview Realbuto said he would have wrestled differently if the scoreboard had been correct, meaning if the E1 had been put up when Miller scored it. And, based on his reaction at the end and having watched wrestlers in similar situations, I'd say he might have an argument. 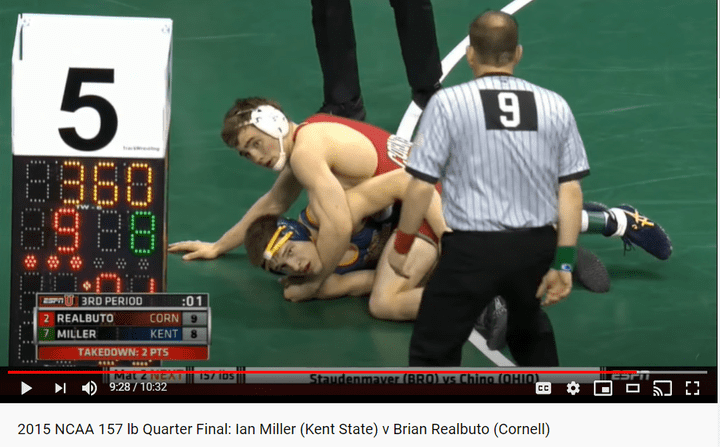 Did Miller Get Screwed

What happens after the final 3rd period whistle is a reminder of what coaches across the country and probably throughout the world tell their wrestlers on the regular - keep wrestling until it's over.

The additional things coaches say. I may have heard Jordan Burroughs say it first, but he's not the only one to mention this type of sentiment:

So, you can't fault Realbuto for going strong in the sudden victory (SV) period. And you have to raise the question -- did Miller have the additional mental or physical gas tank he needed to win this specific match on that day "a 2nd time" in SV.

At the same time, those Magic Plus-Minus buttons in Folkstyle probably played a factor here.

Here's the screen grab from the video as the wrestlers head into the Sudden Victory Period - Miller walking back to the center slowly after getting up slowly. Realbuto ready to go: 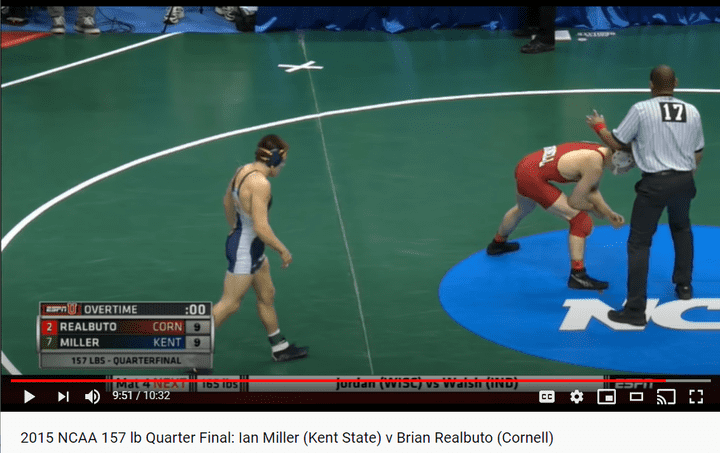 Here's what I think went through the Refs Minds

As they looked at the score, they probably went through a mental checklist, such as:

If the scoring had been done correctly EXCEPT for the missing E1, here's what might have happened in those split seconds of decision making:

Here's a view of the Score sheet with rough notes about the changes needed in the 3rd period.

Hypothetical SCORE: 10-9 decision for Miller b/c of the correction by table help to add missing escape (E1) point

There has been a lot written about how humans make split second decisions. What triggers their mind to think a certain way and how people come to certain conclusions. I'm not an expert, but believe, based on what I've read, that the +2 in place of the T2 could have sent the table help and the referee's brains down a path, where they didn't think they needed to check for proper sequencing.

If the T2, followed by another T2 was on the scores sheet, folks might have recognized the issue and corrected the problem right then and there. This is naturally just my opinion, but ... I don't think many would argue that the E1 was missed, including the ESPN announcers who called the finals.

A Reminder About the History

I chatted with Britt Malinsky from Wrestling by Pir8 about the match and some of the details. He filled me in on this additional insight:

When we played bucket or 21 on the playground as kids, we often would say things like this after someone lost the ball out of bounds or missed a shot:

So, while I believe Ian Miller should have been awarded the victory, I also think there is some truth to the fact that Realbuto may have wrestled differently if the E1 had been scored at the appropriate time. So, maybe Sudden Victory was a just call in the grand scheme of things. And, in that split second of time, Realbuto took advantage of the moment. I wouldn't wish it upon anybody, but you have to be super impressed with how these wrestlers performed throughout their careers. They didn't let it become a defining moment. How they performed and carried themselves thereafter let their true character show through and that's impressive.

What If Tommy Boy Were On the Whistle That Day

And one final note on those Magic PLUS-MINUS Buttons and doing away with them for Folkstyle wrestling. It reminds me of Tommy Boy's question about his inheritance and ownership of his company: Callahan Auto at the end of the movie. He was claiming he deserved to inherit Callahan Auto instead of his step mother. 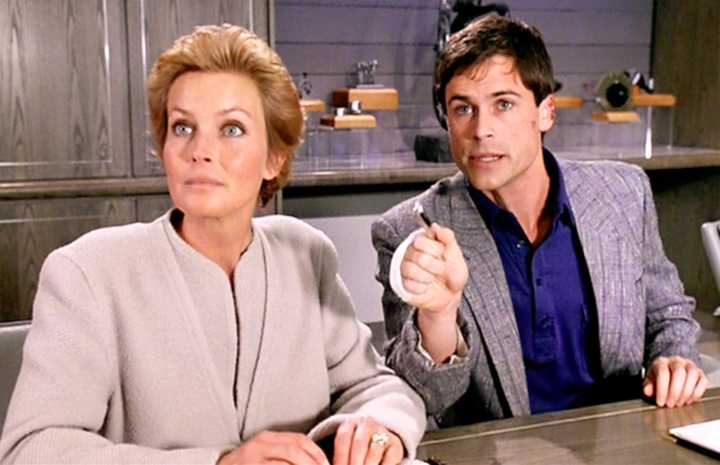 Anytime I see one of those magic plus-minus buttons clicked in Folkstyle wrestling, I think: Who in the Hell clicked +2 --- there must be a problem here. Let's investigate and confirm.

But, that's just me as a stat nerd. For the rest of normal humans without this nervous tick, please help by submitting a ticket to Trackwrestling to Get Rid of the Magic Plus-Minus Buttons.

Please note that we at 3DWS love Trackwrestling and the amazing things they've done for our sport. We also know that the Trackwrestling Live Entry Dashboard needs some work. Most importantly: they need to remove the +1, -1, +2, -2, +3, -3 buttons (the Magic PLUS-MINUS buttons as I call them) from the Live Entry dashboard for Folkstyle. Every point scored in Folkstyle wrestling has a purpose and should be noted as such. Points entered in error should be changed to the correct points or removed based on the referee's decision.

Please let Trackwrestling know by submitting a ticket requesting this: 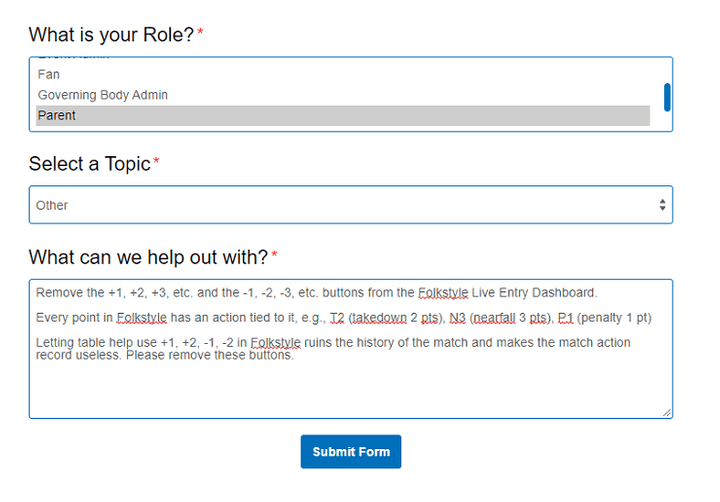 Here's an image of the dashboard. They may not look "prominent" here, but table help at all levels of wrestling, yes, including ALL NCAA Levels, love to click those Magic PLUS-MINUS buttons. Why are they magic you ask. They appear out of nowhere and no one knows how they appeared. Let's eliminate them.

And I can't think of a reason why those options are needed at all in Folkstyle Wrestling ...