It's time to look at your 2020 Hodge Trophy Finalists - and there are a lot of them. We'll also look back to 2008 when there were seven finalists! 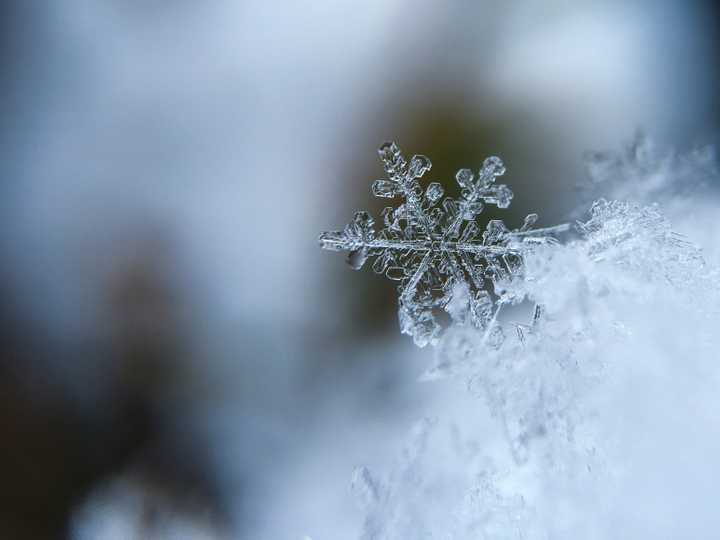 Photo by Aaron Burden - A Snowflake in Focus on Unsplash

Why So Many Finalists

At 3DWS we've created a Hodge Contender Rating (HCR), which analyzes the WIN Magazine criteria in numbers and predicts how the hodge finalists will end up in voting. 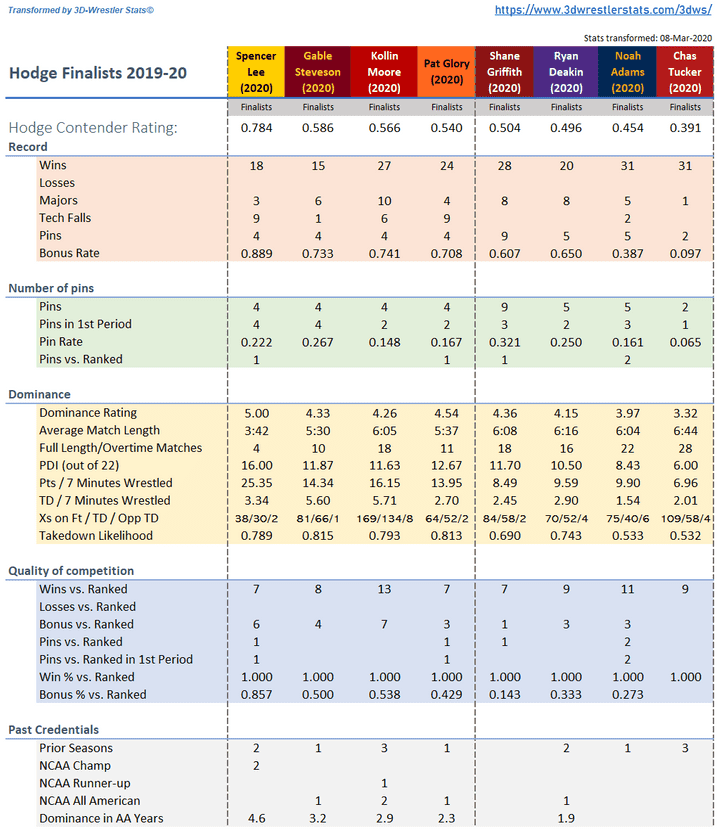 Some History - Is this a lot of finalists - Let's Compare 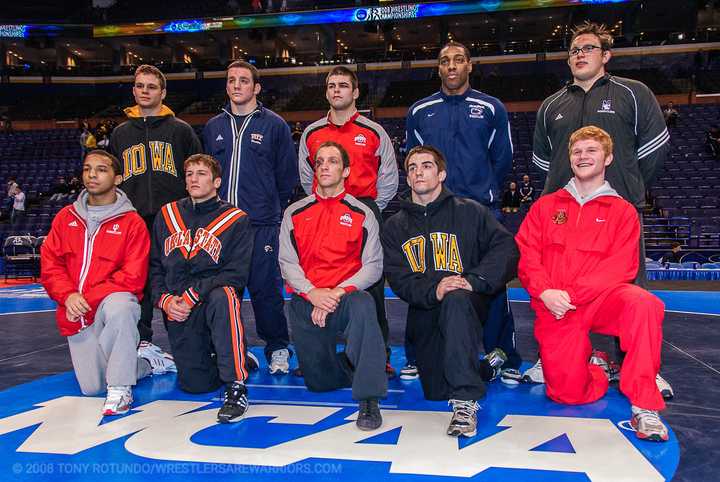 The Hodge Committee has chosen more than four finalists seven times or 28% of the time, for example: 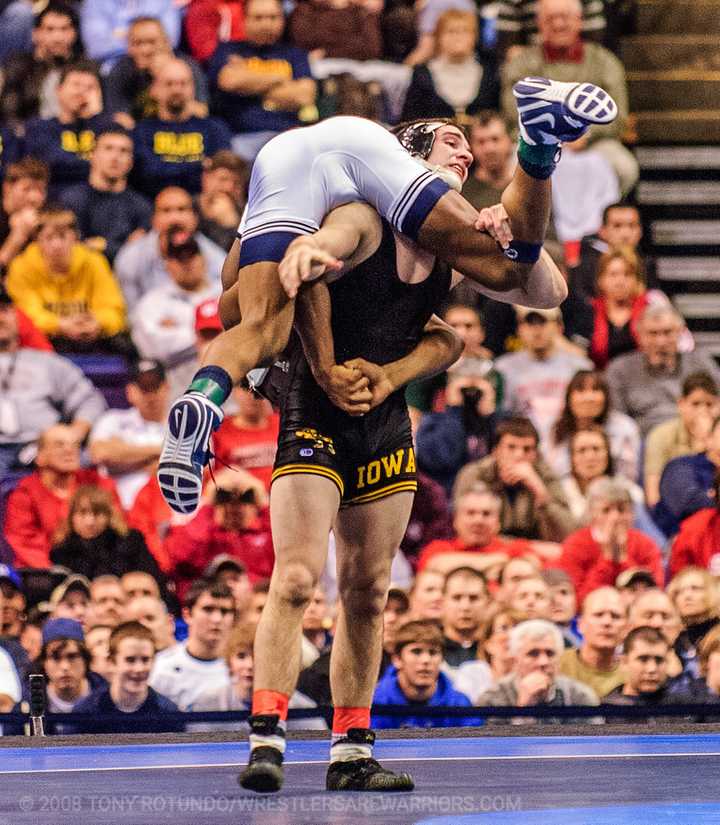 Photo by Tony Rotundo - Brent Metcalf during the 2008 NCAA Finals

In 2008 Brent Metcalf, Iowa, a current Assistant Coach at Iowa State, was selected as the Hodge Trophy winner with 12 pins and a 70% bonus rate. At the time he was a Redshirt Sophomore, having never wrestled his actual Freshman year, which he lost by transferring from Virginia Tech to Iowa.

I found it interesting that 3 other wresters who are currently on D1 coaching staffs, were Hodge Finalists that year:

It's also noteworthy that Metcalf won the Hodge Trophy despite a mid-season loss to Darrion Caldwell. What type of a loss you say? A pin via spladle.

How did that go down: After some great baseline defense by both wrestlers, including several hard clubs (almost punches) by both athletes, the ref stopped the match to verbally warn the athletes in the middle of the first period.

Shortly after the re-start, Caldwell set up a spladle off of a re-attack, rolled through to hook up the spladle and it didn't look like Metcalf would be able to recover (as most except RBY don't). Then it happened --- the pin was called. An additional crazy aspect was the way the ref called the pin. The ref had an odd angle, and so he put his hand in between Metcalf's back and the mat. That was the convincing moment for the ref and he called the pin.

Here are the rest of your 2008 Hodge Trophy Finalists, sorted by Bonus %:

Hodge Trophy vs the Heisman

We often say that the Hodge Trophy is the Heisman Trophy of college wrestling. I would say it's like the Heisman, except on steroids, in most years.

The reason for the difference, in my opinion: the Heisman is a regular season award. The winner of the Heisman doesn't have to face the best of the best in post season play where anything can happen. There are reasons for this and am not suggesting a change to college football.

I am saying the Hodge Trophy is super awesome. The requirements force wrestlers' to prove their mettle in one of the toughest and most amazing tournaments on the planet, the NCAA Wrestling Championships.

I, for one, applaud WIN-Magazine and its sponsors for presenting the Hodge Trophy award in 2020.

But, I do believe it is a different award when it is only a regular season award. This could be part of the reason why the committee included 8 finalists this year.

Get out the Fan Vote

Spencer Lee has the 3DWS Vote

Spencer Lee continues to be the 3DWS front-runner, even though no one at 3D Wrestler Stats has an actual Hodge vote.

Spencer does have a smaller number of pins as compared to some Hodge Trophy winners, but he's right in the middle of the field of this year's finalists. Shane Griffith, an impressive freshman from Stanford, recorded 9 falls this season, the most among the hodge finalists, but that's an outlier. As most know, Spencer won all but one of his non-forfeit matches by bonus this year, and his top game is reaching new levels.

If that doesn't convince you, consider that Spencer is a wrestling innovator in every sense of the word, has an impressive set of past credentials, a huge amount of heart, and is a recognized leader on his team and in his community at Iowa.

We've updated the 3DWS Stats to include advanced statistical analysis on the finalists, so that you can decide for yourself.

To deep dive even more on the stats use these tricks: 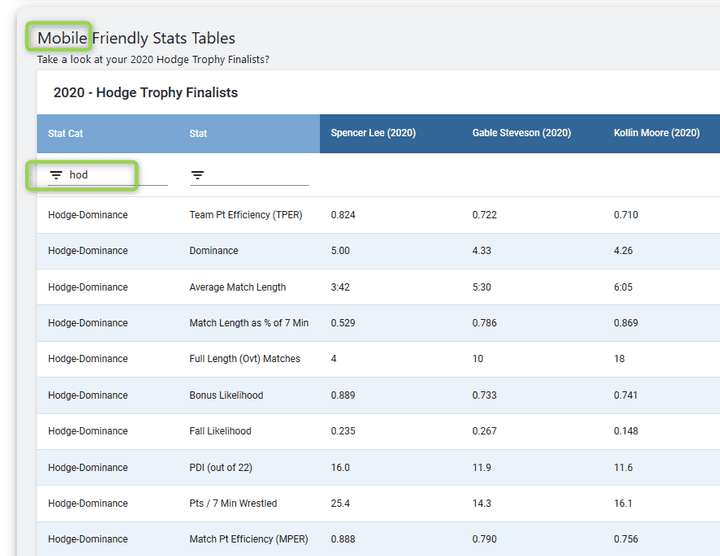